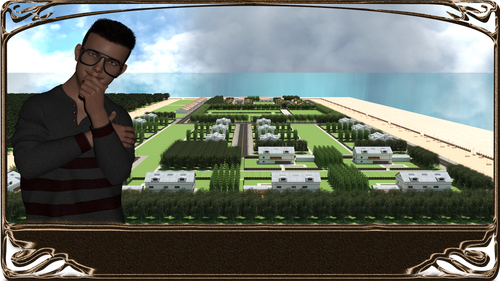 First off, an apology for the poor quality of the first demo, while I been working away the last month, have come to realise how poor the first demo was. I am now working towards a "second demo" of chapter 1 and am close but not there yet, don't want to say when I release it but there is a tremendous improvement in the second demo and will be a great example of the quality you will see going forward in this visual novel.

Attached you will see an image with a frame and the town in the background, this is an example of an image I will be using for a "title screen", this will guide you through each day. So basically "Day 1 - Morning", then afternoon, day 2 etc.

Just an FYI but the town in the title background has been built from scratch by myself and I spent most of the last 2 weeks working on the town, as needed to finish areas off for the title image, and also made improvements to the houses. Like adding a balcony which you will see in scene 2 of chapter 1,  I removed the storage room that closed off the upstairs hallway. I also added a pool into the garden but you not see that until season 2.

I don't want to say when I release the demo, I am close but I'm also working on what I call "base stuff" as well as the second demo, base stuff are basically files in Daz studio which is meant to help me get future updates done faster, most of this is related to scene locations in the town I built.

Get A Town Called Tool - Season 1

A magical journey that leads people to give into there desires while an unforeseen force is plotting against them.